Delhi, Agra, Jaipur and Mumbai: a journey through dazzling colors

These are some of the most captivating destinations in the world. Their unforgettable civilizations and cultural expressions allow travelers to appreciate their traditions and know hundreds of places that allure because of their history and contradictions. 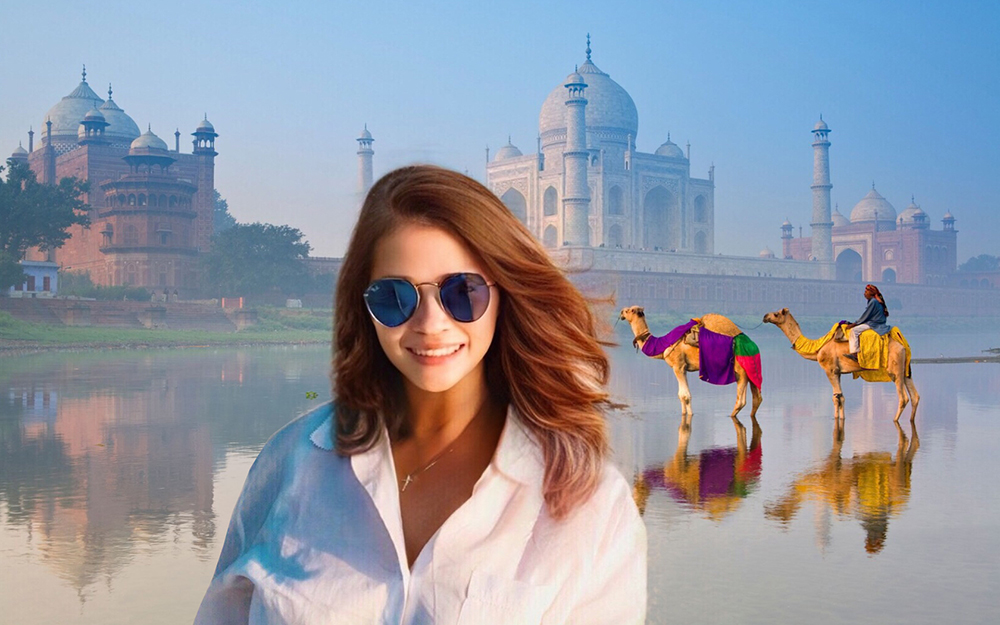 Today, I am infinitely grateful to my friend Ravi Bangar, former Indian ambassador to Colombia, and a generous, charismatic and gentle man who gave me the opportunity to know a beautiful country full of so many contradictions, contrast and romanticism. I only carry in my soul an explosion of colors like the ones from India. I have been in love with this country for many years, but now that I know it, I would go back a thousand times, of course, accompanied by my children. It is such a unique experience that it is worth enjoying it regardless of religion, or cultural, economic, social or racial condition. I thank you, my friend Ravi Bangar, I hope to see you soon again.

Traveling to India is one of the best adventures for tourists who are willing to discover landscapes, sounds, flavors and unknown smells. Here, we tell you why you should visit one of the richest destinations in culture, religion, history and gastronomy.

Between the shores of the Arabian Sea and the foothills of the Himalayas, there is a fascinating country, which is the cradle of ruins, temples, palaces and hundreds of historical sites. There, where cultures and religions meet, is one of the most influential tourist destinations in the world nowadays.

Considered as the headquarters of hundreds of dream places, India is a fantastic world that invites travelers to fall in love with each of its spots. Among the Taj Mahal, the paradisiacal beaches of Goa, home to about 3,000 tigers living in freedom, the southern slope of the Himalayas, the residence of the Dalai Lama, the Thar desert, the old cities of the Rajput warriors and more than 3,000,000 square kilometers, the country is a sign of greatness and multicultural wealth.

In New Delhi, its capital, between the chaos and the calm of its people, it is common to observe the cows that frequently roam the streets, as well as numerous monuments and tourist attractions. The Red Fort, the Jama Masjid Mosque (one of the largest in that nation), Humayun’s Tomb or the Qutub Minar Complex – all of them declared World Heritage Sites – head the list of destinations to visit. Tourists and locals flock to the Gateway of India, the National Monument that honors the 9,000 soldiers who died in World War I and the Afghan Wars.

The capital of India shows a unique history throughout its streets, and as a Mongolian heritage, houses most of the country’s mosques, fortresses and monuments. The contrast between the old and the new Delhi is one of its greatest treasures. 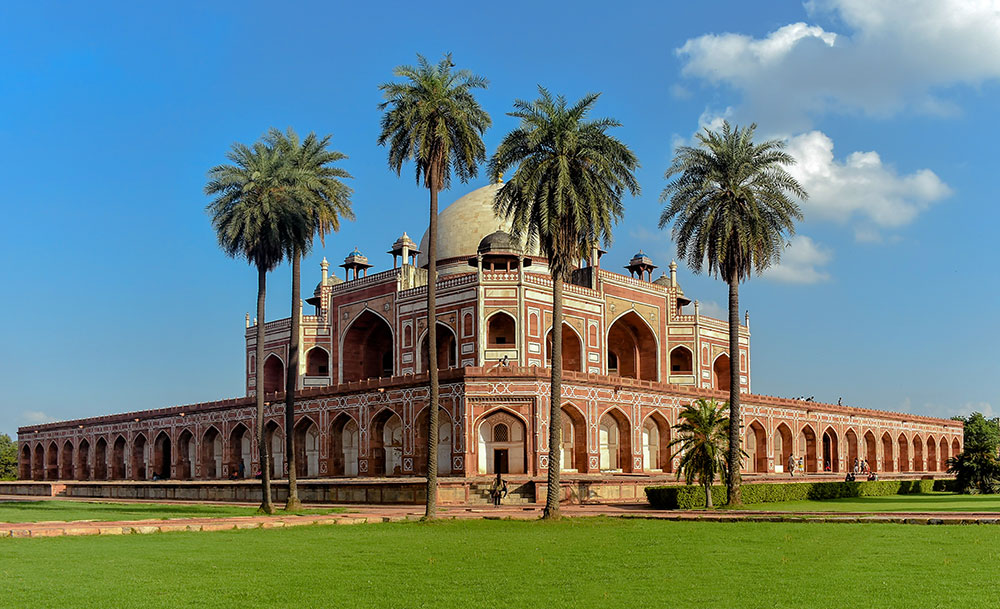 Among its main attractions is the outstanding example of the Islamic art, Qutab Minar, the tallest brick tower in the world, built and carved with verses from the Qur’an in 1206. There is also the Red Fort, a huge wall 6.5 kilometers long with a height that goes from 16 to 33 meters, declared a World Heritage Site by UNESCO in 2007.

And if that was not enough, there is the Jama Masjid Mosque, one of the largest in India, built on a porch with stairs, and distinguished by its unusual red sandstone dome with white marble stripes.

The famous Chandni Chowk market, renowned worldwide for its narrow mazes of streets, and hundreds of people moving from side to side offering clothes, fruits and spices cannot be overlooked; and no less important is the Gurdwara Bangla Sahib temple, the main Sikh shrine completely built-in marble (including the ground), where visitors must cover their head and take off their shoes to enter.

The city is, without a doubt, the soul of this Middle Eastern country. The monuments that stand there are a clear example of the glory and character of their former sovereigns. Nowadays, Delhi offers a combination of modernity and tradition, and it does it so through beautiful gardens, towering skyscrapers and ancient structures.

Among the must-sees are several treasures worth exploring. One of them is the Red Fort, better known as Lal Quila, which is a very significant monument declared a World Heritage Site by Unesco in 2007, as it is the legacy of what became known as the Mogol Empire; It is located in the heart of the capital, its main access is through the famous Lahori Gate, and every day it draws the attention of tourists who get dazzled with the color of their sandstone.

On a small hill in front of the Red Fort, is the largest country’s mosque, which is the main worship center for Muslims in Delhi: the Jama Masjid. The place is located where the well-known and busy Chandni Chowk street begins, an area that in the afternoon turns into a bird market catching the travelers’ attention.

Continuing with the tour of this busy metropolis, it is almost a must to visit the place where Gandhi was cremated: The Raj Ghat, a large green space, ideal for getting lost in silence and meditating. Following that tune of peace and harmony, another must-see is the Lotus Temple, where the Bahai’s prayer house is, and although the place has an imposing and striking exterior design, its interior is sober and quiet, turning it into a place Ideal to escape from chaos.

New Delhi offers a million experiences. Its gastronomic and hotel offer is very wide, with options that fit all travelers’ budget. Three days in Delhi are not enough, it is recommended to schedule an itinerary that allows exploring the city and its surroundings for one or two weeks.

The capital of Rajasthan, with almost three million inhabitants, constitutes one of the vertices of the famous tour through India’s Northern Triangle, and houses an emblematic and unique heritage on its outskirts and among the walls of its historic center. The city with long and wide avenues, designed during the first half of the 18th century by Raja Jai ​​Singh II, is the best planned and urbanized city in the country, considered a Hindu caste of proud warriors and a dynasty almost as old as time.

Jaipur attracts locals and foreigners with Nahargarh Fort, a beautiful fortress ideal for enjoying the magnificent views over the city; the Palace of the Winds that stands out for its spectacular facade and architecture; the Galta Valley, a Hindu pilgrimage center housing several temples and ponds where believers perform some rituals; and Amber Fort, one of the most beautiful buildings in the town.

Jaipur, known as the “Pink City”, is the capital of Rajasthan state. It has imposing and historic buildings painted with pink stucco, as pink is considered the luck color. Its founder built a large observatory, which nowadays honors science and astronomy. Jaipur Palace, the Hawa Mahal, and the Amber and Jaigarh forts are other places to explore.

The second largest city in this state is Jodhpur. There is no room for any color other than blue. From the beginning, the homes of the ‘Blue City’, as it is known, were painted with the hue of the sky. Besides this colour shade, the city is characterized by its narrow streets, the handicraft production, and the export of furniture and carpets.

AGRA: HOME OF THE TAJ MAHAL

About 215 kilometers south of Delhi is Agra, in the Uttar Pradesh state, on the banks of the Yamuna River. This is statistically the most visited city in India, a destination that moves at the speed of light and is recognized for its incredible architecture, and for being one of the most artistic cities in India with a popular craftsmanship of great interest.

Outsiders can enjoy one of the seven wonders of the world: The Taj Mahal, without a doubt, one of the most impressive architectural works in the world. The mausoleum of white marble and precious stones was the idea of Emperor Shah Jahan, who ordered it built for his fourth wife, Mumtaz Mahal, taking almost 22 years to be completed.

For those who wish to spend a romantic vacation, the Taj Mahal, better known as ‘The Great Testament of Love’, is the right place. Built in the Agra city by Mughal emperor Shah Jahan – in memory of his late wife Mumtaz Mahal -, this work shows beauty and perfection explaining why it’s one of the Seven Wonders of the World.

About 35 kilometers from Agra are the Fatehpour Sikri ruins, a sumptuous city built by Emperor Akbar the Great. The emporium was inhabited for 17 years, and later abandoned due to lack of water and fights among its rulers. A historical place that should not be missed.

Traveling to Agra is to go to another world; it’s to discover a land full of history, mysticism and religion, and enter a world of magic, legends and ancient adventures.

Mumbai (or Bombay) is the capital of the Maharashtra state located to the southwest of the country. “Las Vegas” of India, and known both for its nightlife and for being the busiest and most economically prosperous city, as it is the financial and commercial center of the country, besides being the main port of the Arabian Sea.

Its cultural life reflects its population diversity, so it offers a series of museums, libraries, central bazaars, art galleries and renowned theaters. Excursionists cannot miss Colaba, the heart of the old Bombay port; the India Gateway monument; the magnificent Prince of Wales Museum; the Marina Drive boardwalk; and of course, the Chhatrapati Shivaji Station, declared a UNESCO World Heritage Site in 2004.

Although Mumbai seems to be chaotic and crowded, it’s also a city that inspires peacetime. Walking through the Mani Bhavan, where Mahatma Gandhi once lived, created strategies and was finally arrested, is a must. The markets of this town are famous worldwide, as they encourage negotiations to get spices or souvenirs.

A trip to Mumbai would not be complete without visiting the most momentous spots in the Hinduism history. You can do it in the blink of an eye. 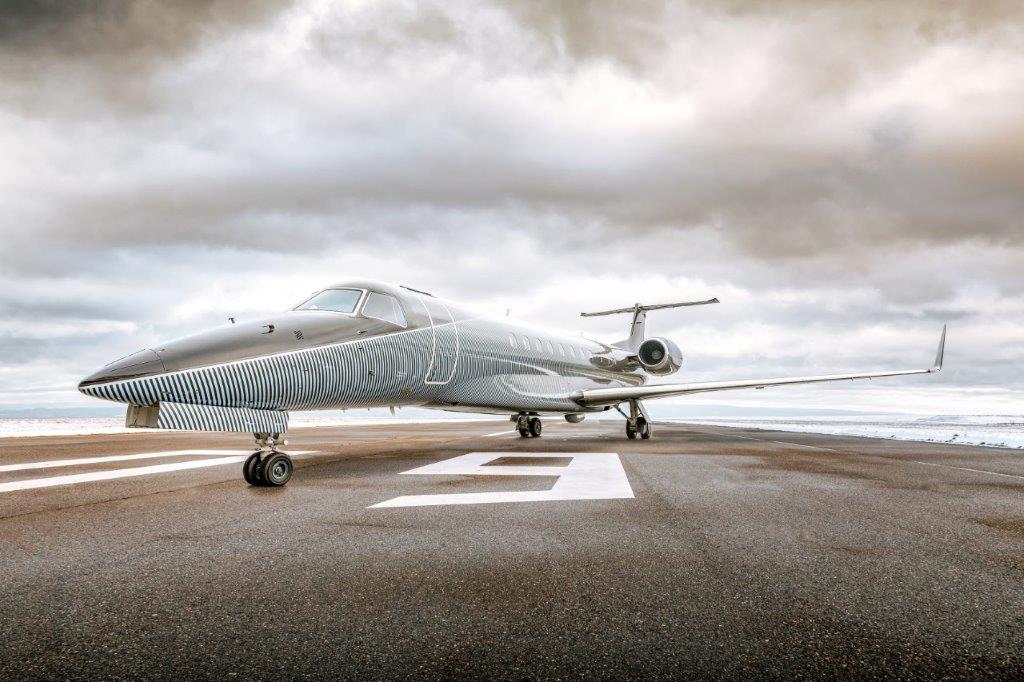